Nat Geo explorer Zeb Hogan returned to the Maeklong River in Thailand on a short research trip.
On arrival at the tidal river, Zeb was met by scientists from VRMC Chulalongkorn University and the stingray fishing team.
Water conditions looked good for the days stingray fishing and floats were soon deployed at various areas of the tidal river.
It did not take long before a slow take registered the arrival of the stingrays.
Winding down into the stingray saw the rod once again pulled into its curve as it took up the weight of the fish.
The battle was over very quickly with the small male Giant freshwater stingray easily over-powered by the heavy equipment.
The stingray was estimated to weigh 30-35kg and was given a thorough examination by the scientists before being tagged and released.
Fishing continued into the afternoon resulting in another Giant freshwater stingray being landed of an estimated 45kg’s.
The male stingray was quickly examined before being tagged and released.
No further stingrays were landed for the rest of the day. 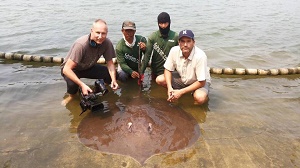