Another visit by Japanese Film makers NHK saw us fishing in the lower reaches of the Mae Klong River in Thailand.
After positioning baits across a wide bend of the tidal river the anglers waited for developments to unfold.
With no takes forthcoming, the team moved to a different area close to the estuary.
Shortly after repositioning the baits, one of the floats was soon moving away.
On winding down into the fish, it embarked on a high speed run quickly coming up in the water to reveal a small Bull Shark.
The Bull Shark was quickly released after a few trophy shots.
In the following hour the team landed two further Bull Sharks with respective weights of 10 and 15 kg.
With a few hours of fishing time left the team made another move further upstream.
The move paid off and saw the team land a small male Giant freshwater stingray of an estimated 20kg’s. 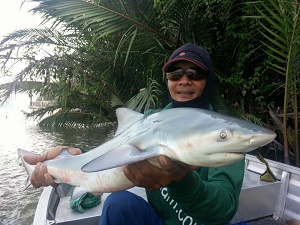