Visiting anglers John from the UK and David from Australia traveled to the Barramundi fishing ponds complex in Ban Pakong near Bangkok.
The anglers were guided by Boy and were soon into numerous hard fighting Barramundi. John utilizing fly fishing tactics landed various Barramundi which tested his tackle to its limit catching fish to an estimated 9kg.
In addition David landed a succession of energetic Barramundi using lure fishing techniques with fish to a similar size. 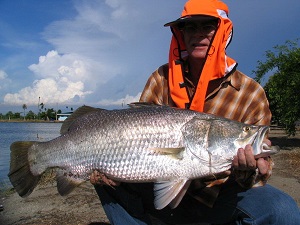