One Ton haul of Catfish Bangkok

Expat angler Lee from Hong Kong a returning client contacted us with regard to organizing a corporate days fishing trip at Bungsamran Lake in Bangkok.
Lee explained that a large group of staff from Cathay Pacific airlines would be visiting Thailand for a Golf tournament in Pattaya and that they would like to organize a fishing tournament between themselves.
After making all necessary arrangements the group arrived in Bangkok and were quickly transported to Bungsamran Lake.
On arrival at the lake a group of fifteen expats assembled on the public fishing are in readiness for a days fishing for Mekong Catfish.
The corporate group from Cathay pacific airlines fished with a total of eight rods which they decided to take turns with, and were soon catching plenty of Mekong Catfish.
Action was thick and fast seeing multiple hookups throughout the afternoon and lots of Mekong Catfish banked with weights ranging between 10 and 20kg’s.
Fishing with sliding float set ups combined with large balls of ground bait the anglers experienced hectic sport with most of the anglers catching an estimated 100kg of fish per person.
Later in the afternoon some of the guys decided to call it a day leaving a few diehards to continue fishing for the monster catfish.
During their highly productive days hauling of Mekong Catfish at Bungsamran Lake the anglers went through almost 200kg of bait in addition to several cases of beer.
The more determined anglers that did choose to continue to fish on went on to land plenty more monster Mekong Catfish with one angler catching in the excess of 150kg’s.
The best fish of the day was estimated to weigh 55kg’s+ with the anglers overall haul easily exceeding a metric ton in weight. 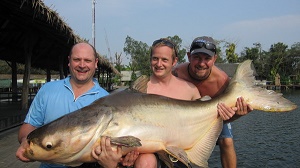