After a hectic days predator fishing at IT Lake Monsters the day before Paul moved onto Palm Tree Lagoon in search of yet more monster fish. Fishing with both carp and predator setups Paul fished close to the restaurant over lightly baited beds of bait. It did not take long before Paul struck into his first fish of the day in the shape of a small Spotted Featherback which was duly landed minutes later. After several more casts a slightly larger and more sought after species picked up one of the anglers lumps of mackerel fished on the edge of the baited area. The fish on this occasion put up a much better account of itself making several deep diving runs before launching itself out of the water. The Peacock Bass was soon overcome with the heavy tackle and brought to the waiting net before being brought onto the bank for photography.

As the days fishing at Palm Tree Lagoon progressed Paul added a decent Redtail Catfish of an estimated 15kg’s to his list of species. After a short spell of inactivity Paul was soon into another Redtail Catfish which tore off across the lake. The fish on this occasion was of a similar size and was released after photography.

Paul fished well into the afternoon before receiving his next take on his carp rod which saw the angler bent into a beautiful Julien’s Golden Price Carp. The stunning carp although not a monster was in perfect condition and estimated to weigh approximately 16lb’s.

As the days fishing at Palm Tree Lagoon continued Paul added further fish to his tally with a 25kg Arapaima falling for his deadbait tactics.

Paul finished the days fishing off with one last Redtail Catfish nudging the 20kg mark which snaffled up one of his mackerel strip deadbait’s fished in the nearby margins.

At the end of the days fishing at Palm Tree Lagoon the UK angler had landed a nine fish haul topped by some rarely seen fish namely Peacock Bass and Julien’s Price Golden Carp. 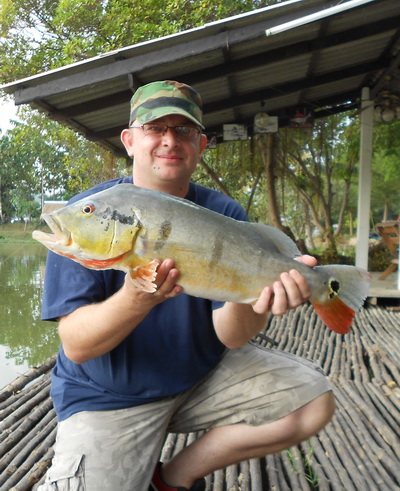