Expat Angler Gary Hawkes visited the highly prolific Topcats Fishery in Koh Samui.
The Medic and assitant to the Honourary British consular for Koh Tao fished method tactics combined with particle hookbait’s to catch several Mekong Catfish to an estimated 30kg’s. In addition Gary caught a few small Pacu to 10kg’s.
After a quiet forty minute spell Gary and the addition of a lump of bread added to his particle hookbaits Gary received an extremely fast take which signaled the beginning of a short ten minute battle.
In the final moments of the capture a large fish surfaced revealing the spectacular scaling of a Niger ‘Ripsaw’ Catfish.
With seven different specimens residing in the lake all over world record size a few tense moments followed before the fish was carefully netted.
The fish was weighed at a record breaking 36lb1oz and witnessed by several onlookers.
All measurements and the weighing of the fish were recorded on video with the fish being witnessed by two IGFA members.
Gary’s record breaking Niger ‘Ripsaw’ Catfish is now under the consideration of the IGFA and is a pending world record for the species! 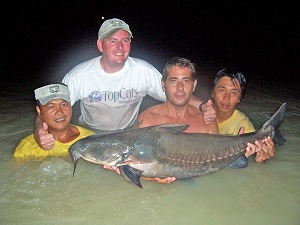