Hawaiian angler Duane whilst on holiday in Bangkok decided that a days fishing for Giant Snakehead would be a perfect diversion from the hustle and bustle of Bangkok.

After travelling for forty minutes from Bangkok Duane arrived at the Pilot 111 fishing ponds complex in readiness for a days lure fishing for predators.

After making several casts with Rapala artificial surface lures without incident the angler moved to a quieter corner of the pond where he began to cast again.

On only his second retrieve the anglers lure was aggressively hit by an unseen predator causing an explosion of water on the surface of the pond.
With the delicate lure fishing rod bent over double the angler was in no mistake as to what had attacked his lure.

The Giant Snakehead angrily shaking its head dived down into the pond causing the reel to release line from its perfectly tightened spool.
A feisty and energetic battle followed for the next few minutes before the Giant Snakehead was finally grabbed by the guide.

The Giant Snakehead weighing just over 2 kg’s was quickly photographed before being released back into the fishing pond.

With the Snakeheads feeding frenzy seeming to slow down the angler decided to move onto one of the adjoining Barramundi ponds to continue lure fishing.

On the first cast into the Barramundi ponds the angler was rewarded by a savage strike which saw the first Barramundi of the day hurling itself free of the water. Seconds later the hooks fell out!

Further casts resulted in yet more strikes from the highly aggressive Barramundi yielding a succession of hard fighting Barramundi between 2-3kg’s. 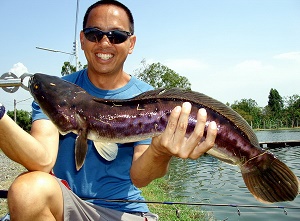