After a highly successful days stingray fishing at the maeklong river on the previous day, the Polish anglers were soon fishing on the tidal river.
In a different area to the previous day, floats were positioned on the edge of the main channel in readiness for more action from the Giant freshwater stingrays.
The stingrays were obliging with a take coming shortly after the floats had been deployed.
A small Giant freshwater stingray was soon brought into the boat of an estimated 25kg before examination and release were carried out.
With an hour or so to go before optimum tidal conditions the anglers waited patiently.
With the tide now nearing its peak time it was no surprise another take was forthcoming.
The stingray on this occasion took over forty minutes to land and was measured at a width of 1.6m with an estimated weight of 150kg.
Another smallish Giant freshwater stingray of an estimated 45kg was landed before the days fishing ended.
Next stop for the Polish anglers on their Thailand fishing holiday is the awesome IT Lake Monsters and Palm Tree Lagoon. 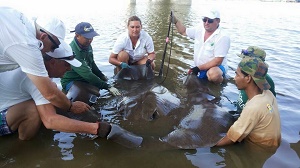