On the second day of his Thailand holiday Craig moved to IT Lake Monsters in search of predatory species.
On arrival at IT Monster lake Craig began lure fishing with a mixture of Owner and Rapala artificial lures and methodically searched the water a series of exploratory casts.
After several retrieves Craig’s lure was savagely hit by an Alligator Gar which immediately launched itself out of the water on setting the hook. After a dogged head shaking fight the fish was finally netted and unhooked by the guide at the waters edge. Further casts with the lure resulted in more Alligator Gar and Pacu being banked with weight’s to an estimated 10kg’s. As the day wore on several Redtail Catfish to 18kg’s were nailed on the lure before sport started to low down.

A change over to deadbait’s soon had the predators on the feed with a succession of Redtail Catfish coming to the bank with weights upto 25kg’s. In addition to the Redtail’s Craig also hooked a decent sized Arapaima which powered off across the lake angrily shaking it head in an attempt to rid itself of the hook.

The owner predator hook held firm and shortly after Craig was proudly cradling a stunning Arapaima of an estimated 25kg’s.

At the end of the days predator fishing session Craig had amassed a large twenty plus fish haul of predatory species topped by Redtail Catfish nudging 25 kg’s in addition to a beautiful Arapaima estimated to weigh 25kg’s. 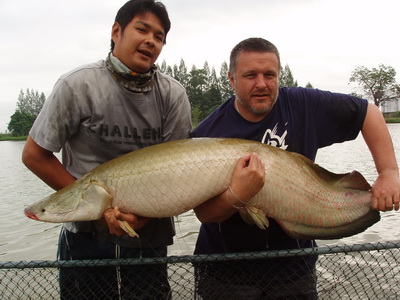