Gavin started the third days fishing at Cha Am on the predator Lake fishing bait in a quiet corner of the lake.

With fish clearly in the area the rod remained very quiet with no action in the first hour.
Suddenly a high speed take saw line being ripped from the spool as an Amazonian Redtail Catfish tore off across the bottom of the lake.

Continued pressure applied from the bank saw the fish turned on several occasions only to power off in another direction.
The Redtail Catfish gave a very good account of its self hugging the bottom throughout the ten minute battle until the last moments when it popped up to the surafec in front of the net.
The fish was quickly pulled into the net and scooped out of the water before being carefully placed on the grassy bank.

The Redtail Catfish was estimated to weigh 30kg’s and proudly displayed bythe captor before being placed back into the lake.

Fishing remained quite slow in the following hours with several dropped runs and another slightly smaller Redtail Catfish gracing the bank.

The angler continued to bait lightly with dead fish strips topping up the swim on a regular basis.

As the afternoon wore on a decent sized Arapaima began showing just off the baited area and it was not long before the bait was picked up and battle commenced.
From the beginning of the battle it was clear the angler was connected to another Arapaima as it continually crashed out of the water.

The battle was short lived as Gavin managed to tame the fish in just over ten minutes.
As the immaculate Arapaima was carefully placed in a recovery cradle the fish was carefully unhooked before a few trophy shots were taken.

After the fish was released the swim went quiet once again, no doubt due to the disturbance of the previous battle.

Gavin added a few more Redtail Catfish in the later part of the day to finish off the days predator fishing at Cha Am fishing Park. 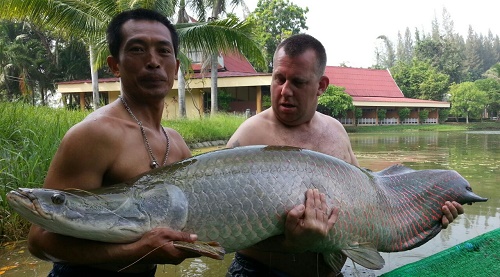