Stephen Scrutton from the UK continued his Thailand predator fishing holiday with a visit to IT Lake Monsters fishing for Thai freshwater predators.
On arrival at the lake the angler began fishing with artificial lures and immediately started picking up Alligator Gar on Cultiva lures.
Steve adopted a mobile approach and cast to any obvious signs of predators in the lake.
Further casts with the lure produced yet more Alligator Gar in addition to several Pacu to 14lb’s.
As the morning wore on the angler started picking up the odd Redtail Catfish on the light weight spinning outfit which tested his gear to its limit!
After landing several more Redtail Catfish the angler had a short break for lunch before changing over to deadbait tactics.
Gently lobbing a mackerel fillet to a quiet marginal spot resulted in an almost instantaneous take which ripped dozens of yards from the reel.
Steve played the unseen predator for almost ten minutes before the fish was finally brought into netting range.
A large swirl appeared in the margins as a large Redtail Catfish slapped the water with its tail.
The large Redtail Catfish was quickly scooped into the net by the guide and hoisted onto the grassy bank.
The Redtail Catfish was estimated to weigh 30kg’s and was released after photography.
The days predator fishing in Thailand at IT Lake Monsters continued in much the same fashion and saw Steve landing a succession of toothy predators.
At the end of the days angling Steve had captured an eighteen fish haul consisting of various monster fish species including Alligator Gar, Pacu, Sharp toothed Catfish and Redtail Catfish to 30kg’s+. 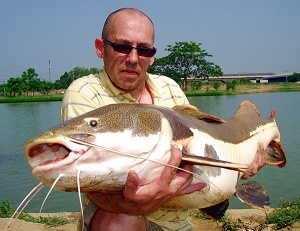