After fishing for the previous two days at other venues the UK anglers decided to try predator fishing IT Lake Monsters for catfish and some other predator species. An early start saw the anglers fishing with livebaits for the various predatory species that reside in the lake. Several aborted takes from the hungry Alligator Gar soon had the anglers changing presentations to get in touch with the fish. Jason soon was attached to a Redtail Catfish which proceeded to charge towards the centre of the lake. The powerful Redtail Catfish tested the light spinning gear to its limits with a series of powerful runs. The fish was landed after a short ten minute battle and was estimated to weigh 15kg’s. After returning the fish the anglers were soon attached to more predators with a bonus Giant Snakehead being next to fall for a livebait.
The days angling progressed well with both anglers catching a series of predatory species including Alligator Gar, Pacu and more Redtail Catfish.
After a brief rest for lunch the anglers recast mackerel fillets in an effort to tempt some of the venues larger residents.
Thirty minutes later a high speed take heralded the beginning of another dogged battle with an unseen predator.
After several powerful runs towards the centre of the lake the fish finally revealed itself out in the centre of the lake.
A large brilliant red tail violently slapped the surface as the Arapaima desperately tried to shake the hook from its mouth.
Several more minutes followed as the Arapaima surged across the surface angrily shaking its head.
Constant pressure soon took its toll on the fight and the fish was carefully steered towards the waiting net.
After netting the fish it was carefully guided into a waiting recovery cradle whilst the hook was removed from its bony mouth.
The Arapaima was estimated to weigh upwards of 100lb’s and was quickly released after a few trophy shots.
The anglers continued to fish throughout the day catching a selection of predatory species with several more Redtail Catfish and a Barred Sorubim also making an appearance to the bank.
At the end of the days angling the UK duo had amassed a haul of mixed predators consisting of over twenty predatory fish 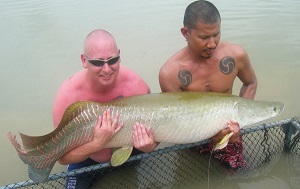