Steven Hing and a friend visited the highly prolific IT Lake Monster predator fishing lake.
Guided by Boy the anglers enjoyed a highly productive morning lure fishing, landing a mixed bag of predatory species including Barramundi, Giant Snakehead and Redtail Catfish.
After a change to deadbait tactics later in the afternoon the anglers latched into several large predators with big Redtail Catfish and Spotted Sorubim making an appearance with estimated weights to 30kg+. 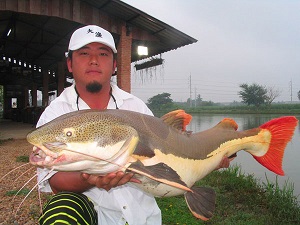