Predator fishing at IT Monster Predator Lake in Thailand

Mick a visiting angler and friend from the UK join Boy once again fishing at IT Monster Predator Lake in Ratchaburi.
After previously losing a large Arapaima the day before Mick landed a succession of hungry predatory fish.
In what could be described as a mixed bag Mick caught various predatory catfish species with weights to an estimated 30kg.
In addition Mick also caught several Arapaima to 50kg’s but did not encounter anything quite as big as the fish that was lost on the previous afternoons fishing trip 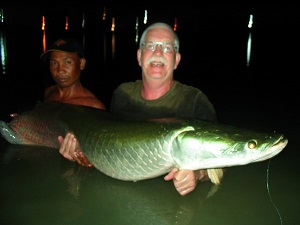