Day two of a two day predator fishing expedition to IT Monster Predator Lake in Ratchaburi saw Brendan and Boy once again on the banks of IT.
After the previous days Catfish success Brendan once again used lure and deadbait tactics to tempt a succession of predatory species including Alligator Gar, Sorubim and Redtail Catfish to an estimated 35 kg’s.
After a change to mackerel fillets in the afternoon Brendan would land several Arapaima gigas to an estimated 50kg’s in addition to a new species of Catfish not previously encountered by the team.
The small Catfish was identified as a Crystal Eyed Catfish and estimated to weigh 8kg’s 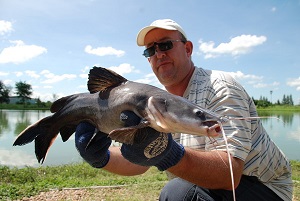