David from the UK on another visit to Thailand decided to begin his holiday fishing at Palm Tree Lagoon.
David fished with two rods for carp and catfish with feeders loaded with groundbait.

With fish showing around the lake the angler also cast out a predator rod baited with raw chicken.

The morning passed quietly with the angler landing two Striped Catfish on the carp rods weighing around the 8kg mark.

As morning turned into afternoon the predator rod fished in a quiet marginal area ripped off with the first predator of the day.
The fish stayed deep throughout the ensuing battle which lasted ten minutes before a large Redtail Catfish was brought to the waiting net.

The Redtail Catfish was estimated to weigh 25kg and was quickly returned after pictures.
A few Striped Catfish followed on the carp rod of a similar size to earlier in the day, but the predator rod remained inactive.

Another hour passed before once again the predator rod was off again.
Once again the fish stayed deep and it soon became obvious that the culprit was another Redtail Catfish.

The Redtail Catfish was landed shortly after and estimated to weigh 30kg’s. 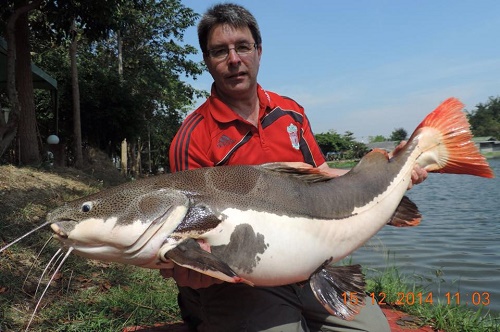