German angler Ulf and his fishing companion continued their Thailand predator fishing holiday with a visit to the highly prolific IT Lake Monsters Predator Lake in Ratchaburi.
On arrival at IT Lake Monsters Predator Lake the anglers began fishing with Cultiva and Rapala lures and were soon getting amongst the predators in the shape of some lively Alligator Gar’s and Pacu.
As the morning’s predator fishing with artificial lures continued the anglers also started to pick up the odd Redtail Catfish which tested their medium weight lure fishing outfits to the limit.
A change over to deadbait in the afternoon saw the anglers catch rate increasing with several more Redtail Catfish to an estimated 25kg’s falling for mackerel fillets.
With several Arapaima’s surfacing just off the baited area it as not long before the anglers hooked an Arapaima which powered off across the lake.
The Arapaima jumped clear of the water on several occasions angrily shaking its head in an attempt to rid itself of the hook.
After a few fraught moments during netting the Arapaima was finally netted and placed gently in a recovery cradle submerged at the lakeside.
After allowing the fish a short period for recovery the anglers posed for photographs with the Arapaima before it was released back into the lake.
Several decent sized Redtail Catfish soon followed with both anglers landing very nice sized Redtail Catfish between 20-30kg’s.
As the days Thailand predator fishing continued the anglers added further Redtail Catfish to their haul of predators in addition to another Arapaima of an estimated 25kg’s.
At the end of the days Thailand predator fishing at IT Lake Monsters the anglers had succeeded in landing over twenty monster fish topped by some hard fighting Amazonian predators to 30kg’s 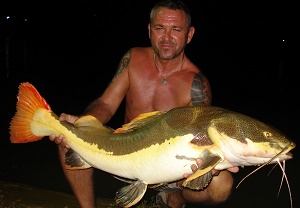