Yvonne and her husband continued their Thailand fishing holiday predator fishing at IT Lake Monsters for freshwater predators.
After an early start the anglers began fishing with artificial lures and adopted a mobile approach.
Slowly walking around the lake the angler’s cast a variety of jointed shads and Cultiva lures towards showing fish in an attempt to hook one of the many predators that regularly showed out in the lake.
After several aborted takes Yvonne’s husband hooked up with a predator which immediately leapt out of the water shaking its head angrily.
With no doubt as to what as attacked his artificial lure the angler carefully played a small Alligator Gar as it embarked on a series of leaps out of the water.
The fish was netted after a brief battle before being released after photography.
The anglers continued to fish for the rest of the morning adding more Alligator Gar and Pacu to their score card.
With a change over of tactics in the afternoon the angler’s offered free lined deadbaits in an attempt to land one of the many Arapaima’s in the lake.
After catching a few more Pacu Yvonne’s deadbait was snapped up by a unseen predator which powered off by across the lake.
From the dogged and jerky manner of the battle it was clear that the angler had hooked an Arapaima which was further confirmed by the appearance of a large red tail thrashing out in the centre of the lake.
After playing the fish with extreme care for a further five minutes the Arapaima was brought into netting range where it was scooped up on the first attempt.
The Arapaima was estimated to weigh 15kg’s and was placed in a recovery cradle to regain its strength.
Yvonne was soon into another big predatory fish which hugged the bottom as it charged off on a series of powerful runs.
The battle on this was entirely different and was fought out in the upper layers of the lake.
After almost fifteen minutes the fish was finally beaten revealing a Chaophraya Catfish of an estimated to weigh 16kg’s.
At the end of the days Thailand predator fishing the Singapore anglers had amassed a large double figure capture consisting of Redtail Catfish, Chaophraya Catfish, Pacu, Alligator Gar and Arapaima with fish to an estimated 20kg’s all caught on a combination of lure and deadbaits. 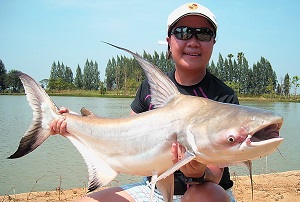