UK angler Gavin continued his Thailand fishing holiday with a visit to IT Lake Monster.
After an early start the angler was soon casting lures to showing fish trying to induce a take from the many predators regularly topping in the central part of the lake.

After several casts and slow retrieves the angler was soon hooked up with the first fish of the day.
After a short but spirited battle a small Alligator Gar was quickly unhooked, photographed and slipped back into the lake.

As the morning’s fishing wore on the fish continued to strike at the lures with more Gar and Pacu being brought to the bank.

After a short spell with little activity the rod was pulled over into its full curve as slightly bigger fish hit the lure.
The fish on this occasion moved off powerfully across the bottom and across the lake. Gavin played the fish patiently on the medium weight spinning outfit and was soon netting a nice Redtail Catfish.

After a short break for lunch the angler began bait fishing with large mackerel sections and was soon off the mark with a lovely Redtail Catfish of 20kg’s.

With fish topping and swirling over the prebaited spot the angler swang yet another mackerel section into the swim.
Within minutes another hard fighting Redtail Catfish was tearing off round the lake putting a healthy bend in the rod.

The action continued throughout the afternoon with a succession of Redtail Catfish with weights ranging between 15-30kg’s.

Gavin also added several other Asian Redtail Catfish to his haul of monster fish in addition to Sorubim before the days angling ended. 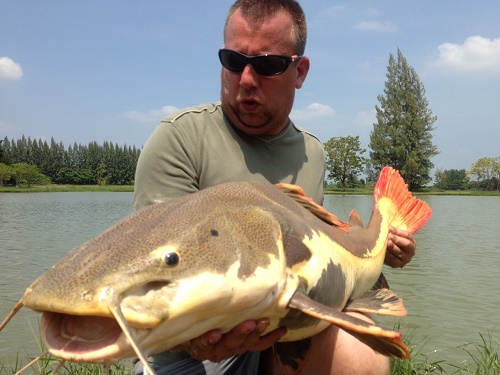