Hong Kong residents and predator fishing fans Lee and Chris started their Thailand predator fishing holiday with a visit to the IT Lake Monsters Fishing Park in search of monster predators.
After arriving at the predator fishing lake the anglers soon were casting lures towards the numerous fish showing out in the lake.
It didnt take long for the first take of the day as a small Alligator Gar slammed aggressively into the anglers lure. A short but spirited battle followed which saw the Alligator Gar angrily shaking its head in an attempt to shake free the lure.
After quickly unhooking and releasing the Alligator Gar the anglers continued casting to various areas around the lake and picked up a few more Alligator Gar’s estimated to weigh between 5-8kg’s.
The anglers also accounted for several Amazonian Pacu which also took an interest in their artificial lures causing the fish to leap out of the water each time they were hooked.
An added bonus in the shape of a stunning Tambaqui was also landed by Lee which fell for a Cultiva lure fished in a quiet area of the lake.
A change over to deadbait in the afternoon soon saw the predator fishing action move up a gear with both anglers experiencing simultaneous hook ups with Amazonian Redtail Catfish on several occasions.
Another slow and determined run saw an Arapaima moving off with the anglers carefully presented deadbait which proceeded to power off to the far side of the fishing lake.
A short ten minute battle followed which saw the Arapaima characteristically shaking its head and breaching the surface of the water in an effort to throw the hook.
After several fraught moments at netting the Arapaima was gently guided into the submerged recovery cradle and allowed a few minutes to recover from the fight.
The Arapaima was estimated to weigh 25-30 kg’s and was quickly released back into the fishing pond.
Predator Fishing with deadbaits fished hard on the bottom certainly seemed to be the way to go with the anglers seemingly hitting into a large shoal of Redtail Catfish which powered off with the anglers baits at regular intervals.
As the days predator fishing continued the anglers tally of Redtail continued to multiply with the hungry Redtail Catfish constantly picking up the baits.
At the end of the days Thailand predator fishing trip the anglers had amassed a large twenty five fish haul consisting of Alligator Gar, Arapaima, Pacu, Tambaqui, a small Rohu and lots of hard fighting Redtail Catfish topped by several fish over the 30kg mark. 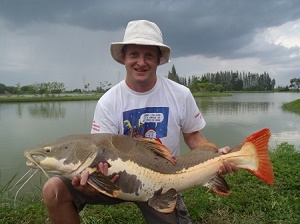