Palm Tree owner Benny and a EU client Martin visited the Mae Klong River fishing for stingrays.
The anglers fished several different areas of the river without success in the first part of the day, before deciding to move further downstream.
Fishing close to the estuary in slightly brackish water, floats were deployed alongside the central channel.
As the afternoon slowly passed no action was forthcoming and the floats remained lifeless.
Shortly before the end of the days angling one of the floats registered a take.
On winding down into the stingray it was soon apparent that it was only a small specimen.
The small Giant freshwater stingray was landed very quickly and was brought into the boat.
The stingray was estimated to weigh 30kg’s and was released after photography.
No further stingrays were caught on this trip, which is slightly out of character for this time in the season. 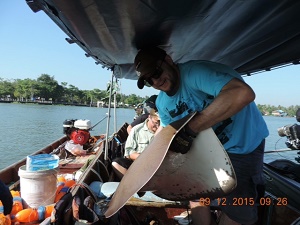