Amanda and her fiancée started their Thailand holiday with a visit to IT Lake Monsters fishing for Redtail Catfish and other predators.
The first day saw the anglers fishing with a combination of lures and bait catching a variety of exotic species.

The second day saw both anglers fishing with lures in the morning and catching Pacu, Alligator Gar and a bonus Asian Redtail Catfish.

A change over to bait in the afternoon saw the anglers both bagging up landing a succession of hard fighting Redtail Catfish, Sorubim and Asian Redtail Catfish.
Amanda also fished with live bait under a float for a while and managed to land a lovely Chaophraya Catfish weighing over 30-35kg.

The Redtail Catfish continued to visit the swim with several double hook ups in the later part of the day.
With the resident shoal of Redtail Catfish clearly homing in on their baited area action was ensured and the anglers capitalised on it landing lots more fish.

At the end of the days fishing for Redtail Catfish the anglers had landed literally dozens of Redtail’s in addition to Pacu, Alligator Gar, Chaophraya Catfish, Sorubim and Asian Redtail Catfish 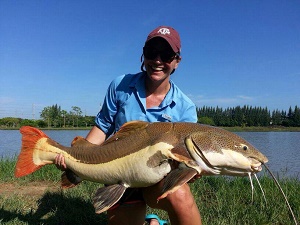