River fishing in Thailand for Stingrays

US angler Justin visited the Maeklong River in Thailand fishing for Giant freshwater stingrays.
After boarding the boat the angler was quickly transported to the fishing grounds in readiness for the incoming tide.
With the tide now at its highest point the anglers waited patiently for events to unfold.
It was not long before a slight nodding on the tip soon developed into a full blown run tearing yard upon yard of line from the reel.
Winding down into the fish saw the rod bent into its full parabolic curve as the fish powerfully moved off across the riverbed.
The anchor was quickly pulled up and the boat was allowed to be pulled upstream by the unseen monster Stingray.
After repositioning the boat above the Giant freshwater stingray battle again recommenced from directly above.
The unseen Giant freshwater stingray soon went to ground embedding itself into the muddy substrate with immovable force.
The battle continued to rage on for a further three hours with the strain being placed on the fish being such that a prototype rod was shattered.
After retying the mainline onto another rod the fight resumed seeing both anglers taking turns to try to land the monster stingray.
After almost three hours the monster Giant freshwater stingray was finally brought to the surface where it angrily thrashed its deadly tail.
The tail was quickly made safe with a cloth wrapping before the Giant freshwater stingray was brought to shallower water at the river side.
The monster Giant freshwater stingray with a width of over two metres was estimated to weigh in the excess of 200kg’s and was released shortly after photography 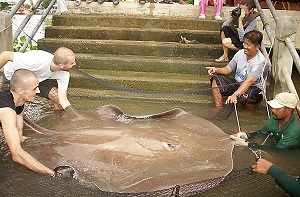