Another visit to the Maeklong River in Samut Songkran province saw Jeremy Wade once again moored up on a wide stretch of the river filming another segment of the River Monsters Death Ray Stingray show.
Fishing with a combination of dead and live baits the angler positioned rods at various points across the river.
Large 1kg leads were used to hold bottom in the heavy tidal flow of the river with long fluorocarbon hooklinks of 150lb’s and large Owner Circle hooks.
Heavy weight Okuma stand up rods fitted with Okuma 2 speed multipliers completed the set-up.
With the incoming tide almost at its highest point Jeremy waited patiently for further developments.
It was not long before a slight tapping on the rod tip signaled the arrival of the Giant freshwater stingray before line began to be stripped from the multiplier.
Slowly winding into the rapidly departing stingray immediately caused the fish to embed itself into the muddy substrate creating an unmovable dead weight.
After repositioning the boat above the unseen stingray pressure was once again applied from directly above causing the fish to move once again further upstream.
Several minutes passed before the stingray was finally prized from the bottom and played out in open water.
The Giant freshwater stingray was clearly not a large specimen was soon brought alongside the boat where it was promptly netted on the first attempt.
After carefully securing the fish Jeremy and the Fishsiam team slowly returned to the bankside delivering the stingray to waiting scientists from Chulalongkorn University on the riverside.
The scientists immediately began to take various samples from the stingray for future scientific analysis before weighing the fish at 40.1kg’s.
The Giant freshwater stingray was observed to be a male with a width of 1.3m’s.
After the Chulalongkorn science team assisted by fish biologist Jeremy Wade had fitted an electronic tag the fish was quickly released back to the river.
Quickly returning to the previously productive area saw Jeremy Wade back in position with fresh baits in place.
Just fifteen minutes later another take was received from a rod fished in the main flow of the river.
As the mainline slowly started to trickle from the reel the anglers engaged the reel and wound down hard into the fish.
A dull thudding sensation was transmitted up the line indicating a small stingray of a similar size to the last.
Constant pressure from above soon saw the Giant freshwater stingray languishing next to the boat where it was promptly netted by the team.
On inspection the stingray was observed to be another male of a similar size to the last fish with an estimated weight of 45kg’s.
The Giant freshwater stingray was promptly delivered to the scientists who conducted various scientific procedures at the riverside research site.
After recording all relevant data the stingray was released carefully back to the Maeklong river by Jeremy Wade as the Icon Film crew expertly filmed events. 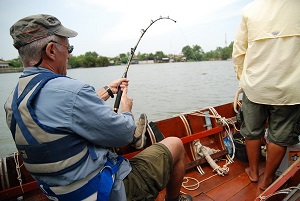 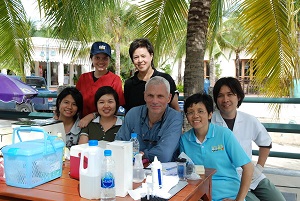