International angler Jeremy Wade started the River Monsters expedition fishing at the Maeklong River in Samut Songkran.
Jeremy Wade anchored up on a wide bend of the river and positioned a series of baits at various parts of the river before waiting for further developments to unfold.

With conditions looking perfect for the capture of a Giant freshwater stingray the Jeremy patiently waited for a take.

After two hours had already passed uneventfully the tip of the Okuma Tournament rod steadily pulled over as a Giant freshwater stingray moved off with the bait 17m’s below.
Winding down into the fish saw the rod bend at an even greater angle as the full weight of the fish was transmitted up the mainline.

The Giant freshwater stingray powerfully moved across the bottom seemingly unaware that it was hooked!
Several powerful runs saw the boat being pulled upstream by the unseen prehistoric predator!

Continued steady pressure applied from above saw the fish going to ground on the river bed requiring the repositioning of the boat allowing direct contact to be regained with the monster stingray.
Jeremy Wade hauled at the fish for over an hour bringing the fish off the bottom on several occasions.
Each time the fish would dive back down into the depths!
After almost an hour and a half the stingray was finally netted some 800m’s upstream from the site of the initial hooking.

All events were captured on film ny the Icon Films production team and will be appearing in the latest series of River Monsters on Animal Planet in a show entitled Death Ray due to air in April 2010. 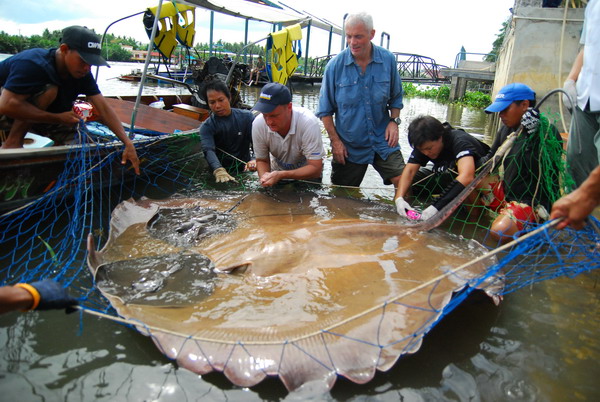