Bangkok Carp angler Brendan once again returned to Bungsamran Lake in Bangkok fishing for Giant Siamese Carp.
After landing three carp on the previous day the angler fished from the public bank to the previously productive area.
Fishing with large balls of local groundbait loaded onto 4oz Fox Method feeders with super sharp Owner hooks suspended above with rig foam the angler cast close to nearby structure. A small Striped Catfish opened Brendan’s account which was soon landed after a short battle. After rebaiting the feeder and recasting back to the marginal hotspot the angler patiently waited for events to unfold. A high speed take soon had the angler playing a very lively Giant Siamese Carp which proceeded to head immediately towards the nearby snags! Applying side strain saw the fish kiting on a long line out towards the centre of the lake where it charged off on another series of powerful runs. Fifteen minutes later Brendan managed to bring the carp to the waiting net where the fish was expertly netted by Nok. With the fish on the unhooking mat the anglers estimated the carp’s weight to be around the 20 kg region. Recasting back to the same area the angler quietly waited for more action as plumes of bubbles regularly fizzed to the surface. Several tense minutes passed before another fast take signalled the beginning of yet another battle with a carp. On this occasion the fish headed into open water where it embarked on a series of powerful runs up and down the lake.
Brendan was forced to follow the carp along the fishing platform in an effort to keep in contact with the fish. Fifteen minutes later and over 100m’s away from the scene of the initial hooking the Carp was finally netted. After bringing the carp up onto the unhooking mat the Giant Siamese Carp was estimated to weigh 16kg’s. Brendan continued to fish throughout the day accounting for several other Mekong Catfish to 30kg’s in addition to catching a few Striped Catfish to 10kg’s.
At the end of the days angling Brendan had landed 15 fish topped by a beautiful pair of Giant Siamese Carp to 20kg’s 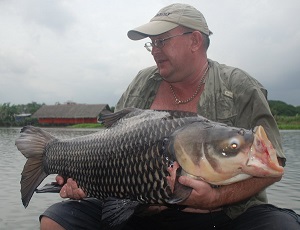