Singapore team scores at IT Monster Predator Lake in Thailand

Kevin Tan and Mooky were joined by Mick a UK angler for a fishing visit to the highly prolific IT Monster Predator Lake in Ratchaburi.
The anglers experienced non stop action with the hungry residents relentlessly picking up the anglers baits.
The highly productive fishing session yielded a whole host of native and imported predatory species with several Arapaima making an appearance in addition to various predatory catfish species.
The anglers were guided by Boy and Fishsiam team member Jeab during their days predator fishing at IT Lake Monster in Thailand 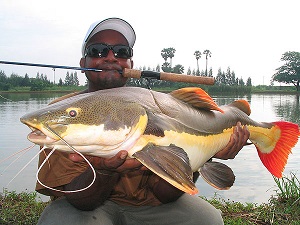