An early morning start saw UK anglers Brendan and Rusty carp fishing on the public area of Bungsamran Lake in Bangkok.
Fishing to a heavily baited marginal area the anglers used 4oz Fox Method feeders loaded with local groundbait and flavourings. Short three inch hooklinks combined with super sharp Owner hooks completed the set-up popped up with rig foam.
It was not long before the anglers received their first take as one of the reels burst into life as line was ripped from the spool. Quickly engaging the baitrunner on the reel saw the rod hoop over into full parabolic fighting curve.
A dogged battle followed which saw the Giant Siamese Carp continually trying to enter the safety of the nearby snags.
Finally after several fraught moments at netting the fish was brought over the waiting net. On hoisting the fish onto the unhooking mat it was observed to be in fantastic condition and estimated to weigh 22kg’s.
After rebaiting the rods the anglers patiently waited for another bite. Thirty minutes later a mass of bubbles began to surface in the centre of the baited area clearly indicating the presence of a carp.
Moments later another high speed run occurred on a rod fished close to the nearby snags signaling the beginning of another fifteen minute battle! This time Brendan took charge of the rod skillfully guiding the fish into open water.
After playing the fish out in the centre of the lake for several minutes the Giant Siamese Carp once again charged towards the supports of the fishing stage in an attempt to gain freedom. Using the full weight of the rod the angler carefully guided the fish back out towards open water where it languished on the surface.
Boy quickly scooped the fish into the landing net before hauling it up onto the unhooking mat. The fish was estimated to weigh 20kg’s and was released after a few quick photographs.
The days fishing continued in the same manner with both anglers landing a further four Giant Siamese Carp with weights between 19-25kg’s.
Several small Striped Catfish were also captured with relatively low average weights of between 8-12kg’s. 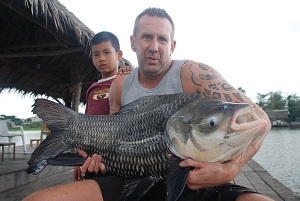