After a very lean and usual run of no fish landed in the preceding week Tim and Brett ventured down to the Maeklong River fishing for Giant freshwater stingrays.
On arrival at the tidal river the anglers began fishing at a previously productive spot, but after a few hours fishing with no action decided to move area.
The next area also failed to produce any interest from the stingrays despite the anglers fishing with numerous baits.
A decision was made to make a final move and saw the anglers moving area once again.
This proved to be a wise decision as the anglers were rewarded with a take.
The Giant freshwater stingray on this occasion was easily brought in and was estimated to weigh 25-30kg.
The stingray was quickly unhooked and photographed before being released.
Despite fishing for a further few hours the anglers failed to catch any more stingrays 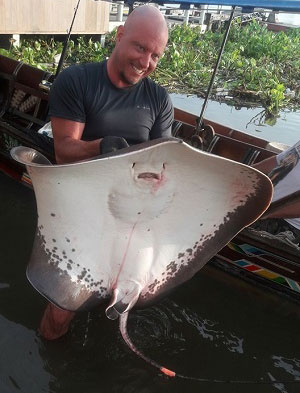