David and Alison from the UK returned to the new Thailand Amazon BKK1 predator lake for one last day’s predator fishing for monster fish.
The day was particularily hot and saw the anglers fishing once again with float fished predator rigs baited with small livebaits.
David and Alison both presented baits at varying depths to try to locate the predators preferred depth.
After making slight changes in the depth of their float fished presentations one of the floats was dragged across the surface.
Winding down hard into the fish with a medium weight spinning outfit saw the hook set firmly as a small Arapaima broke the surface before diving back down to the bottom.
The Arapaima was quickly landed and estimated to weigh 15kg’s before being slipped back into the pond away from the fishing area.
David and Alison fished well through the early part of the day landing a succession of small Arapaima to 20kg’s.
With the pond being relatively small and the anglers already catching quite a few fish action slowed down with bites becoming extremely hard to come by.
After moving position to a quiet corner of the pond the anglers began to pick up fish once again with David landing an immaculate Giant Snakehead of an estimated 4.5kg’s.
Alison and David also added further Striped Sorubim, Pacu and Arapaima to their haul as the day’s predator fishing drew to a close.
At the end of the day’s predator fishing the anglers had caught a mixed bag of various predatory species with monster fish to 30kg’s/ 66lb’s. 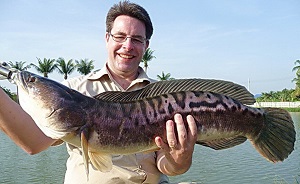