Another lure fishing session in Chiang Mai saw German angler Reiner fishing Mae Kuang after a period of heavy rainfall.
Reiner began fishing at sunrise and quietly motored out into the dam looking for signs of fish activity.

After stopping at several different areas and making a series of casts the angler kept moving in an attempt to locate feeding fish.
The conditions looked perfect with a steamy mist coming off of the waters surface and conditions seemed ideal for fishing.
Stopping at another likely looking area the German angler expertly flicked his lure towards a mass of submerged roots.

Varying his rate of retrieve saw the angler quickly hooking into a Giant Snakehead of 1.5kg’s which was played out after a relatively short battle.
The German angler continually kept casting tight to the bank allowing the lure to cover as much water as possible.

Regular changing of lures resulted in several more takes accounting for fish of 1.2-1.8 kg.
Another change of location saw the angler once again casting towards nearby structure in an attempt to lure further predators.

After two or three casts the lure was aggressively attacked by an angry snakehead which launched itself clear of the water thrashing its head from side to side in an attempt to rod itself of the hook!

Quickly setting the hook firmly into the fish the angler immediately applied side strain with the rod bringing the fish into open water.
After several violent lunges towards some nearby snags the fish was finally brought towards the waiting net.

After removing the lure from the fish’s mouth the fish was weighed at a weight of 4.1kg’s before being released back into the lake.

The German angler continued to fish throughout the day going on to catch several more Giant Snakeheads with relatively low weights between 1-2kg’s. 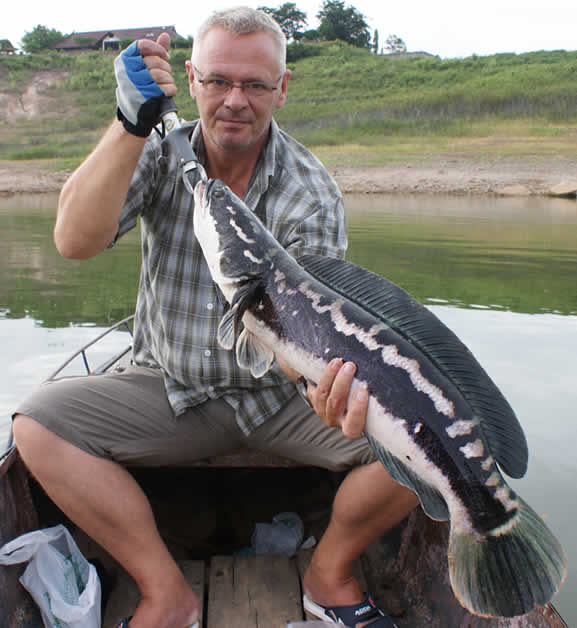