On the second day of his fishing holiday Rutger visited Pilot 111 Fishing ponds near Bangkok fishing for Snakehead and other predatory monster fish.
Rutger chose to begin Snakehead fishing on one of the various fishing ponds and began a series of exploratory casts into a quiet corner of the fishing pond.
After three or four casts the angler’s lure was violently attacked as he quickly retrieved it across the surface.
Setting the hook into the Snakehead saw the predatory fish angrily shaking its head and diving down into the pond.
Rutger played the Giant Snakehead expertly and soon had the Snakehead within netting range were it was scooped up by the guide.
The Giant Snakehead was weighed at a weight of 2.2 kg and was released after a few trophy shots were snapped off on the camera.
Further casts into the Snakehead fishing ponds saw Swedish angler Rutger hook into several other Giant Snakeheads ranging in weight between 1-2kg’s.
After enjoying a hectic morning Snakehead fishing at the Pilot 111 fishing ponds the Swedish angler moved onto one of the adjacent fishing ponds to target the Asian Redtail Catfish.
Changing over to a Cultiva mid depth lure pattern the angler was soon into his first Asian Redtail Catfish which after snapping up the artificial lure hugged the bottom deeply causing the angler to exert plenty of pressure on the fish with the rod held aloft.
The pressure soon took its toll on the Asian Redtail Catfish which was soon rolling on the surface within netting range.
Rutger continued to cast with his successful lure pattern and accounted for another six or seven Asian Redtail Catfish between 1.5-3.5kg’s.
After a short stop for lunch in the onsite restaurant the Swedish angler was once again casting into one of the other adjacent ponds.
On the third retrieve the Swede’s lure was savagely grabbed by a Barramundi which hurled itself out of the fishing pond before crashing back into the water.
The Barramundi repeated this acrobatic aerial performance on several other occasions before it was finally brought to the waiting net.
Rutger fished extremely well throughout the day accounting for a massive twenty six fish haul of predators.
Included in the Swedish anglers haul whilst lure fishing at Pilot 111 fishing ponds were several Giant Snakeheads to 2.2kg in addition to eight Asian Redtail Catfish to 3.5 kg, a dozen or so Barramundi to 3kg’s and numerous Pacu with weights ranging between 1-2.5kg’s 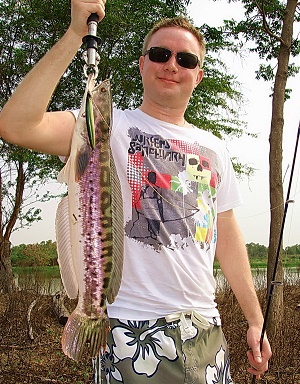