Stingray fishing at the Ban Pakong River in Thailand

International specimen hunter Peter from Germany once again returned to the Ban Pakong River in Chachoengsao province.
Peter joined by a friend was soon stingray fishing on a wide section of the river that has previously produced freshwater stingrays to world record proportions.
After placing baits at various points across the river the anglers waited patiently for developments to unfold.
After fishing for a few hours without incident one of the rods began to nod as line began to slowly be pulled from the reel.
Winding down into the stingray saw the rod dragged down towards the river as the full weight of the stingray was taken by the angler.
The stingray moved away powerfully across the riverbed causing the rod to creak under the strain.
Continued pressure applied from directly above the fish soon caused the freshwater stingray to go to ground embedding itself deeply under the muddy riverbed.
A ten minute tug of war commenced which saw Peter applying maximum pressure on the rod to shift the unseen stingray.
After ten minutes of what appeared to be a stale mate the stingray was on the move again causing the anglers to reposition the boat once again.
The anglers battled the fish for a further twenty minutes before the freshwater stingray was finally brought to the surface for the first time.
As the large Giant freshwater stingray was slowly pulled towards the boat it made one last powerful dive back down into the depths only for the anglers to haul it back up to the surface.
The large freshwater stingray was quickly secured alongside the boat before being transported to the riverside for photography.
The Giant freshwater stingray was estimated to weigh 150kg’s and was identified as being a female.
The River Monster was released back into the river soon after all scientific data was recorded. 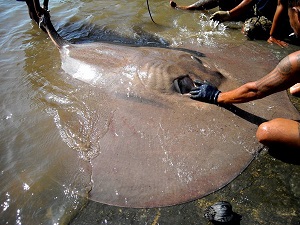