The second day of the French angler’s trip to the Mae klong River saw them fishing further upstream than the previous day. As per usual baits were positioned at various points across the river in readiness for the arrival of the stingrays.

After landing a 100 kg River Monster on the previous day the anglers confidence was high and as the Mae klong river began to reach its highest point the Giant freshwater stingrays started to become active.

Several aborted takes saw baits being retrieved that had been totally flattened and displaying deep indentations which could only have been caused by the abrasive mouth of a juvenile freshwater stingray.

A change over to fishing smaller baits was soon made in an effort to hook one of the elusive stingrays.

Several more aborted takes followed before the anglers finally hooked another stingray. On this occasion the fish was beaten after a brief battle and was easily over-powered by the heavy duty big game fishing gear.

The Stingray on this occasion was identified as a small male and was estimated to weigh 30 kg’s and was released after a few trophy shots and a short period for recovery.

Soufiene and his son fished on for several more hours  at the Mae klong River,landing one more Giant freshwater stingray in the process of a similar size to the last.

Although receiving twelve takes in a single day the anglers efforts to land another River Monster were hampered by numerous aborted takes due in no doubt to a large shoal of juvenile stingrays continually homing in on the anglers baits. 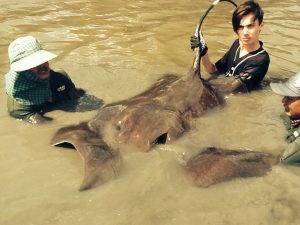