The second day of Martins stingray fishing holiday at the Mae Klong River in Thailand saw him fishing in a wide section of the tidal river.
After placing baits at various intervals across the river the angler sat back and waited for events to unfold.
The first two hours passed quickly before a slow determined run saw the angler once again attached to a good sized Giant freshwater stingray.
With the rod fully bent into full compression the angler began to prise the unseen stingray off of the bottom.
The stingray responded with a powerful charge downstream pulling the boat behind it.
Martin poured on the pressure from above and was finally rewarded as the stingray released itself from the muddy substrate.
The Giant freshwater stingray was then slowly brought up from the depths towards the waiting net.
The stingray was measured at a width of 1.75m and was estimated to weigh possibly 180kg.
Martin continued fishing for a further few hours and landed another smaller stingray estimated to weigh 70kg before the days stingray fishing ended. 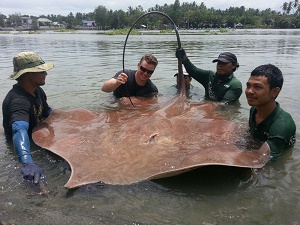