US angler Shannon whilst on a short holiday in Bangkok decided to visit the Maeklong River fishing for Giant Freshwater stingrays. Upon arrival at the tidal river the anglers were soon fishing on a wide bend of the river with baits placed at various distances out in the river. With the incoming tide rapidly pushing up the water level of the river it did not take long before one of the baits was picked up by an unseen Giant freshwater stingray.
One of the American anglers quickly donned the fighting harness and clipped on to the large Okuma Makaira multiplier before winding down into the stingray. As the heavy duty stand up rod bent into the fish the angler slowly began to try to lever the stingray off the riverbed. A ten minute battle followed with the Giant freshwater stingray characteristically clamping onto the muddy riverbed in an attempt to evade capture. The continual pressure applied with the big stand up rod soon got the stingray moving again where it slowly kited beneath the longtail fishing boat in mid water.
Several minutes later the stingray was brought to the surface layers where it thrashed its tail wildly in defeat.
The Giant Freshwater stingray was quickly identified as being a male and was estimated to weigh 40kg’s before being placed on a stringer at the riverside.
With a few hours productive fishing time still left the anglers quickly re positioned themselves back in place ready for more Giant freshwater stingray action.
Only twenty minutes later another bait was picked up by another member of the shoal and saw the next angler ready to do battle.
The Giant freshwater stingray on this occasion gave a similar account of itself but took slightly longer to land due being played on a 50lb class outfit.
The Giant freshwater stingray which was estimated to be of a similar size to the first was once again retained at the riverside allowing the anglers to continue fishing.
The US anglers fished for a further two hours before the tide began to turn back towards the Gulf of Thailand.
Just when the anglers were about to finish fishing one of the baits was once again picked up.
The Giant freshwater stingray on this occasion was brought up relatively quickly on the hevy duty 130lb class outfit.
The stingray on this occasion was estimated to weigh 30kg’s and was quickly transported to the riverside for the all important group trophy shot.
After a few quick photographs were taken the stingrays were all released back into the tidal river and the days stingray fishing concluded. 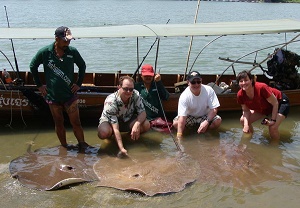