US angler Li continued his Thailand fishing holiday with a visit to the Maeklong River at Samut Songkran.
On arrival the angler was quickly transported downstream to a wide stretch of the tidal river before floats were set across its main channel.

Within only an hours fishing Li had already landed a small Giant freshwater stingray of 20kg’s which had been easily over powered by the heavy duty big game fishing equipment.

Another take came a few hours later which saw the angler attached to a slightly bigger Giant freshwater stingray.
The stingray on this occasion went to ground on several occasions clamping tightly to the bottom in an effort to evade capture.

Each time the boat was moved over the fish and the stingray was prised off of the bottom.
After repeating this process a few times the angler finally succeeded in bringing the stingray off the bottom.

The Giant freshwater stingray was then slowly winched to the surface and netted.

On inspection the Giant freshwater stingray was identified as being a male and was estimated to weigh 40kg.

With still time left for fishing Maeklong River  stingray baits were once again deployed in readiness for more action. 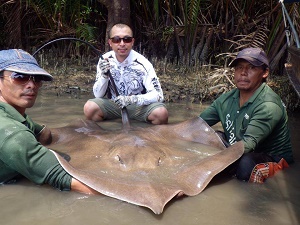