Team fishsiam visited the Ban Pakong River once again in search of Giant freshwater stingrays.
Stingray Fishing at two different areas of the tidal river Rick aided by Ow, Jeap, Ohm and Q fished large livebaits out in the main flow in search of the mighty Himantura Chaophraya.
After a just a few hours one of the livebaits was picked up signaling the start of a twenty-five minute battle which saw the Giant Freshwater Stingray clamp onto the bottom on several occasions.
Finally the giant freshwater stingray was brought to the boat and safely taken to shallower water the fish was photographed and safely released back to the murky waters of the Ban Pakong River. The small male specimen was estimated to weigh in the region of 45-50kg.
With still a few hours left of high water in the tidal river it was agreed that the rods would be repositioned in the hope of another take. With the light fading another much more determined take would signal the start of a much longer battle!
This battle would last over one hour and forty minutes and see our trusty Penn Tuna stick broken clean in half! After cutting the line and retying the mainline to a new rod the battle resumed testing each of the five anglers to their limits.
A Giant freshwater stingray with a diameter of 1.6m was brought alongside the boat where it thrashed wildly before diving back to the bottom, after repeating this process on two more occasions the monster ray was finally towed into shallower water.
In the final seconds of this epic capture with the prehistoric fish seemingly beaten, a sudden violent lunge would see the monster ray snap the leader in a defiant show of power before disappearing into the murky depths of the mighty Ban Pakong. 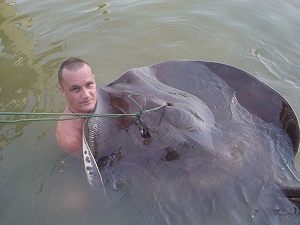