The third day of a six day Maeklong River stingray fishing expedition saw the TBS Japan team in search of monster stingrays.
Fishing on a wide bend in the river the anglers fished a variety of livebaits out into the flow of the main river.
After previously catching no less than four different stingrays the previous day the angler’s confidence was sky high.
Two hours after beginning fishing the anglers were into a fish which was soon overpowered by the heavy big game tackle.
On bringing the stingray to the surface the anglers were greeted by a small female of an estimated 30kg’s in weight.
The stingray was quickly transferred to a small boat which ferried the fish to waiting scientists at the riverside.
The freshwater stingray was measured at a width of 1m and was fitted with an electronic tagging device before being released.
After repositioning the rods the anglers did not have long to wait before another fish snapped up the bait.
A slow ticking indicated that a rod fished into mid stream had received a take.
Slowly winding down into the stingray saw the rod dip down towards the surface before bouncing back up again.
Quickly retrieving mainline back onto the spool of the reel soon had the angler back in direct contact with the fish which immediately dived back down onto the bottom.
Continued pressure from directly above soon had the fish moving again where it was brought up into the middle layers of the river.
Several more deep diving lunges followed before the Giant freshwater stingray was finally brought alongside the boat for netting.
The stingray was netted on the first attempt and was identified as being another female.
The Giant freshwater was estimated to weigh 30-32kg’s and was measured at a width of 1.1m’s.
After delivering the stingray to the waiting scientists the anglers returned to the previously productive mark and repositioned the baits for one last time.
After waiting for a further hour the anglers were alerted to yet another take which saw line being pulled from the reel in short bursts.
Winding down into the stingray saw the fish brought up with relative ease after a brief five minute battle.
The stingray was identified as being a small male with a width of 0.9ms and was estimated to weigh 25kg’s. 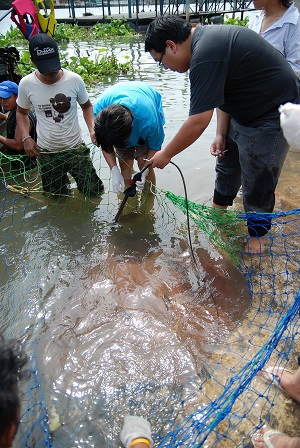