After catching several monster Giant freshwater stingrays from the Ban Pakong and Maeklong Rivers in the previous days fishing, Dutch angler Wim once again commenced stingray fishing on the Maeklong River.
After firmly mounting large live baits onto 10/0 Owner hooks baits where placed at various intervals across the massive tidal river.
With the incoming tide signaling feeding time for the Giant freshwater stingrays it was not long before Wim was attached to a River Monster which was clearly bigger than anything he had previously encountered.
The Dutch angler was soon strapped into the fighting harness and the rod was jammed into the gimble mounted on the seat.
Winding down into the unseen Giant freshwater stingray caused the stingray to respond with an awesome display of power causing the boat to swing round in mid stream.
Expertly gunning the old mini engine on the boat the captain soon had the boat repositioned directly over the stingray allowing Wim to exert maximum pressure on the stingray from above.
After pulling dozens of yards of line from the tightened spool of the Okuma Makaira Multiplier the Giant freshwater stingray suddenly came to a dead halt.
The stingray having embedded itself deeply into the muddy river bottom became an unmovable dead weight which could not be shifted by any amount of pressure from above.
Repositioning the fishing boat several metres down stream Wim once again applied pressure from a different angle in an attempt to move the stingray from its subterranean lair.
Continued pressure applied from a different angle soon got the monster stingray on the move again with yet another unstoppable forty yard run upstream.
With the boat drifting behind the Giant freshwater stingray Wim continued to crank line back onto the spool of the Makaira multiplier.
Moments later the Giant Stingray once again came to an abrupt stop deep beneath the boat as it embedded firmly in the muddy substrate.
The epic battle raged on for a further arm aching one and a half hours seeing the monster stingray making powerful and unstoppable runs in between prolonged periods clamped firmly to the muddy riverbed.
After exerting copious amounts of pressure on the unseen Giant freshwater Stingray the rod suddenly sprang back as the stingray released its grip of the muddy river bottom.
Winding the reel handle furiously saw line being rapidly replaced on the reel causing the heavy stand up rod to take the full weight of the stingray.
As the Giant Stingray effortlessly glided off of the bottom several metres below the rod tip was dragged violently towards the water.
Slowly but surely the main line was replaced back onto the reel and the leader knot was carefully threaded through the roller guides.
Several minutes later the monster Giant freshwater stingray was brought up to the surface layers where it thrashed wildly as it was brought into the folds of the giant net.
After securing the Stingray next to the boat the stingray was slowly transported to the riverside for examination by veterinary scientists.
The gigantic Giant Freshwater stingray was measured at a width of 193cm with a length of 412 cm’s from rostrum to tail.
The Megafish was estimated to weigh a colossal 200kg’s and was released shortly after photography and scientific examination.
The monster Giant freshwater stingray was clearly a personal best and a just reward for the Dutch angler after stingray fishing in Thailand for almost a week. 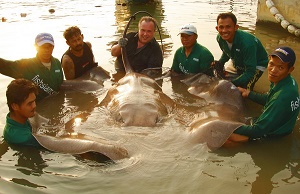