Day four of the TBS Network stingray fishing expedition saw the anglers and film makers once again trying to capture a big Giant freshwater stingray from the Maeklong River.
Stingray fishing in a previously productive tidal section of the river the anglers offered large livebaits which were anchored to the riverbed with large 1kg weights.
Several hours passed before a clicking of the Okuma reel alerted the anglers to a bite from a stingray.
On winding down into the fish the stingray quickly embedded itself into the muddy riverbed causing the anglers to apply maximum pressure from above.
A fifteen minute battle followed which saw the stingray move slowly across the riverbed intermittently clamping onto the muddy substrate.
Each time the anglers repositioned the boat and reapplied pressure from above.
The relentless pressure placed on the fish with the rod soon had the stingray moving around in the middle layers of the river where it was played out with relative ease.

On netting the stingray it was observed to be a male and was estimated to weigh 50kg’s. The stingray was measured with a width of 1.2m’s and was quickly transported to the waiting scientists for examination.
Returning to the river the anglers once again rebaited their hooks before repositioning the rods across the main expanse of river.
After waiting a further two hours the reel once again signaled another take slowly clicking as line was pulled from its spool.
A relatively uneventful battle followed which saw the stingray brought alongside the boat after a short ten minute struggle.

The stingray was identified as being another male with a width of 1m and was estimated to weigh 30kg’s plus.
The Giant freshwater stingray was quickly transported to the waiting scientists who carried out a thorough scientific examination before releasing the fish 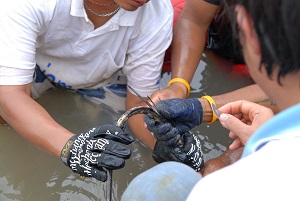