The second day of the latest TBS stingray fishing expedition saw the Fishsiam team fishing the infamous Area 51 stretch of the Maeklong River.
The TBS television team accompanied by a well known Japanese martial arts expert waited patiently for the stingrays to arrive.
With the incoming high tide rapidly advancing a slow take began to develop causing line to slowly click from the heavy Okuma multiplier reel.
Winding down into the unseen stingray resulted in a huge display of power as line began to stream from the tightened reel.
With assistance from the team the martial arts expert commenced battle with the unseen Giant freshwater Stingray.
A grueling fifty minute battle ensued which saw the stingray embedding itself into the muddy riverbed on numerous occasions.
The Giant freshwater stingray fought extremely hard causing the martial artist to call on all his strength and endurance.
After moving the fish off the bottom on various occasions the stingray was finally shifted from its underwater lair and brought up into the middle layers of the tidal river.
The Giant freshwater stingray was finally brought alongside the boat and slowly pulled over the net to reveal a monster female freshwater stingray.
After transporting the stingray to the riverside it was quickly examined by the Chulalongkorn University science team who recorded all data concerning the stingray.
The Giant freshwater stingray was estimated to weigh 185kg’s and was released shortly after photography 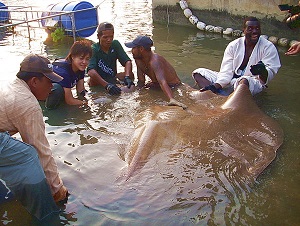