A short 6 hour visit to the Ban Pakong saw Koto-san land an estimated 40kg+ Giant freshwater stingray. After a short stingray fishing session which saw the angler and his friends receive no less than six takes in four hours on the legendary river, the anglers finally succeeded in hooking their intended species.
A long and protracted battle ensued which saw the anglers tested to their physical limits! Finally a lively Giant freshwater stingray was brought alongside the boat.
Photographs and measurements were recorded before safely releasing the creature back to its watery home! Koto-san was aided in his capture by Fishsiam members Boy, Ohm and Q. This was the Japanese businessmens second encounter with the Giant freshwater stingray with the angler previously catching a small 30kg specimen from the infamous Area 51 stretch of the Maeklong River. 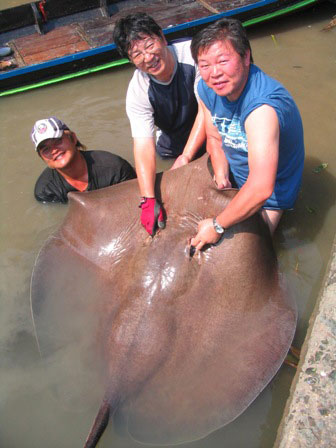