After several months planning his Thailand fishing holiday, French angler Soufiene and his son arrived at the Mae klong River in Samut Songkran. Inspired by watching Jeremy Wade’s River Monsters Death Ray show filmed at the Mae klong River with Fishsiam both anglers were keen to target the Giant freshwater stingray.
The first days fishing at the Mae klong River saw both anglers fishing in the estuary section of the river with baits placed at various marks spanning the tidal river.
After several hours a slow take indicated the arrival of the stingrays on the rising tide, which saw the rod take on a healthy curve. The anglers quickly wound down into the unseen stingray and battle commenced.
The Giant freshwater stingray was clearly a smallish specimen as it was beaten within ten minutes and brought to the waiting net. On observation the stingray was identified as being a small male with a width of 1.2m and was estimated to weigh 50kg.
After photographing and releasing the first stingray the anglers were soon attached to another fish which seemed much bigger. A long drawn out battle followed lasting over thirty minutes which saw father and son both fighting the unseen River Monster.
After clamping onto the bottom on several occasions the Giant stingray was finally brought off the bottom and over the waiting net. The Giant freshwater stingray was observed to be a female and was measured at a width of 1.42 m with an estimated weight of 100 kg’s placed on it. 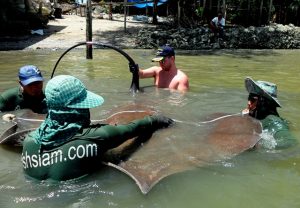