After landing a true River Monster on the previous days fishing at the Mae Klong River in Thailand the TBS TV show Thailand Stingray fishing crew ended their trip with one last day filming on the river.
The Japanese anglers were soon positioned on a wide section of the mae klong river in the infamous area 51, scene of numerous monster stingray captures by our clients in recent years.
After deploying floats the anglers settled back and waited for the tidal river to begin to rise.
With the Maeklong River now at optimum depth and water conditions looking good, it didn’t take long before the Giant freshwater stingrays took an interest in the baits.
The first stingray was landed after a short unremarkable battle and was estimated to weigh 40kg, after a quick examination by VRMC the stingray was released back into the tidal river.
The second take saw the anglers hooked up with a bigger specimen. The stingray on this occasion stayed tight to the bottom moving determinately upstream.
On winding into the stingray it responded by stripping several yards of line off the Makaira multiplier.
The battle on this occasion lasted 45 minutes seeing the stingray clamping onto the bottom several times before capture.
The Giant freshwater stingray on this occasion measured 1.89m in width and was estimated to weigh 190kg’s.
After a thorough examination by Chulalongkorn University scientist Dr.Chansue the stingray was released back into the river.
The TBS team managed to land one other small Giant freshwater stingray before the days fishing ended, bringing a close to another highly successful stingray film. 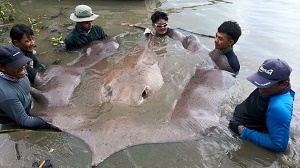