Fishsiam proguide and local angler Jeab returned once again to Bungsamran Lake in Bangkok for another carp fishing session.
With the local angler already catching several large Giant Siamese Carp on the two preceeding days and the swim still obviously containing carp Jeab quickly began to put out his rods with anticipation.
Jeab presented 4oz Fox Method feeders loaded with local groundbait laced with butter and coconut milk.Short 3inch hooklinks attached to Owner hooks completed the set-up.
The Owner hooks were popped-up with rig foam above large jaffa sized balls of groundbait which had been carefully placed near a marginal snag that had been heavily prebaited over the previous week.
After a few strenuous hours of catching small Mekong Catfish and Striped Catfish Jeabs bouyant hookbait was finally picked up by a Giant Siamese Carp.
An extremely fast take signalled the beginning of a twenty minute battle which saw the unseen carp making continued attempts to enter the nearby snags.The rampaging carp finally succedded in entering the snags causing the line to grate agonisingly against the wooden supports.
Jeab instantly entered the water in an attempt to free the stricken carp.Expertly following the path of the braided mainline through the snags Jeab painstakingly traced the path of the mainline.Chan local angler and Bungsamran employee patiently held the rod as Jeab tried to free the tangled line.
Seconds later the mainline was freed and the battle commenced this time with Chan holding the rod.
A short ten minute battle ensued that saw the carp once again try to enter the snags.
Chan expertly guided the fish out of the danger area before netting the fish minutes later.
The carp was estimated to weigh in the region of 20kg’s.
After retying the rigs on both rods the baits were repositioned over the productive area.A quiet spell continued for the next few hours before another high speed take saw Jeab clamping down hard on the reel.Once again the unseen fish attempted to enter the nearby structure.
Each time Jeab steered the angry fish from the snags and back into open water.The battle continued for thirty minutes with Jeab fighting to retain control over the unseen carp.
In the final seconds of the battle an extremely large swirl appeared near the surface.
Nong Boy instantly swiped the net through the water scooping up the large Giant Siamese Carp in its folds.
The carp was given a few minutes to recover before being hoisted onto the mat.
The Giant siamese carp was estimated to weigh 30kg’s and was released after photography. 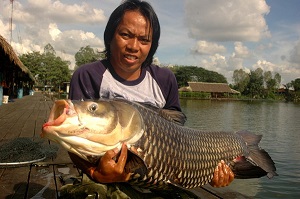