Mustad representatives and fishing writers Atle and Emma from Norway decided to end their Thailand fishing holiday with a trip to IT Lake Monsters Predator fishing.

On arrival at the fishing pond the anglers were soon becoming acquainted with the various predators in the lake with both of them landing Alligator Gar and Pacu.

Further cast with lures produced Sorubim and Asian Redtail Catfish with weights to around 15-20kg.

With a change over to deadbait in the afternoon the anglers started bagging up with Redtail Catfish with both of them landing fish of over 20kg’s.

Later in the afternoon the Atle hooked a much larger predator which immediately breached out of the water revealing a good sized Arapaima.

The Arapaima embarked on a series of head shaking runs in an effort to rid itself of the hook.

The hook held firm and Atle expertly played the Arapaima until it started to tire.

The Arapaima was carefully led towards the waiting recovery cradle and quickly unhooked.

The Arapaima was estimated to weigh in the region of 60kg making it the largest fish of the day.

At the end of the days Thailand Arapaima and predator fishing both anglers had succeeded in landing double figure hauls of monster fish consisting largely of Redtail Catfish and topped by Atles Arapaima. 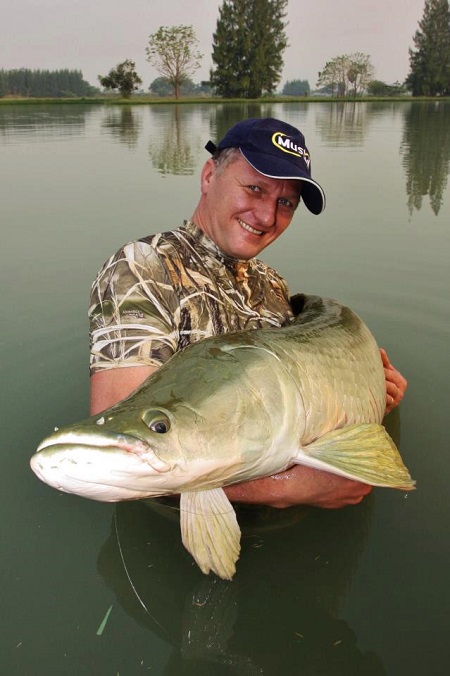