UK angler and Bangkok resident Brendan returned to Bungsamran Lake in Bangkok fishing for Giant Siamese Carp and Mekong Catfish.
On arrival at the lake the angler began fishing on the public bank placing his rods close to the nearby structure of the fishing platform.
The angler chose to bait up the marginal area with several large balls of groundbait laced with coconut milk and flavorings.
The angler opened his account with a small Striped Catfish which was landed after a short and uneventful battle.
After releasing the catfish the angler repositioned his rods over the baited and waited for further events to unfold.
Suddenly after a brief period of inactivity one of the rods burst into life as a large bow wave appeared in the swim.
Clamping down into the fish saw the rod arch over into full battle curve as a large Giant Siamese Carp charged up and down the margins.
A hectic fifteen minute battle followed which saw the angler having to bully the monster carp away from the snags on several occasions.
Finally the carp was brought into netting range where it was expertly scooped into the landing net.
The monster Carp was hoisted onto the unhooking mat where it was estimated to weigh in the excess of 40kg’s.
The carp was quickly photographed before being carefully slipped back into the lake.
Brendan continued to fish for the remainder of the day amassing a double figure haul consisting of Mekong Catfish and Striped Catfish with several specimens to an estimated 25kg’s+. 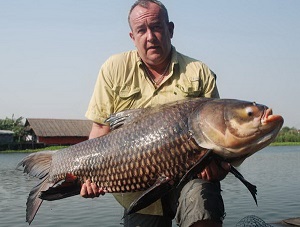