US angler Mike continued his Thailand fishing holiday with a visit to Palm Tree Lagoon.
On arrival at the lake Mike wasted no time in casting out two rods for carp and catfish baited with cereal groundbait and another predator rod with a large section of mackerel.

Mike also introduced several kilos of free offerings on his respective areas before sitting back to await events.

Through the course of the morning Mike landed a few Redtail Catfish with weights ranging between 15-25kg.
The carp rod remained quiet throughout the early part of the day before a fast run signalled the arrival of a carp or catfish.
After playing the carp for several minutes it soon became clear that the fish was a Julien’s Golden Price carp as it rolled several times just in front of the net.
After netting the stunning asian carp the captor proudly held the carp aloft for photos before slipping it back into the lake.

More predators followed as the afternoon rolled on ,with the angler landing Asian Redtail Catfish and Pacu on successive casts with the predator rod in addition to dropping several fish.

With dusk only minutes away a high speed take signalled the beginning of an epic battle on the carp rod.
The carp on this occasion stayed very deep and low in the water exploiting the considerable depths of the lake to its full advantage.
Continued pressure applied with the strong carp rod failed to bring the carp under control as it made several circuits of the lake causing other fish to scatter in its wake.

Then battle raged on past the hour mark before the carp finally showed out in the centre of the lake creating a massive splash as it dived back down to the depths.

Mike played the fish well for almost another hour with the carp continuing to power off at every opportunity. The fish was brought close to the bank on several occasions before powering off into the central part of the lake.

With the battle reaching almost an hour the carp was finally brought into the margins where it was scooped into the waiting net.

After a few minutes to allow both the fish and the angler to recover the carp was carefully displayed for the camera and quickly identified by Benny as being a fish caught two weeks previously at a weight of 71kg’s.

After a few trophy shots the Giant Siamese Carp was slowly lowered back into the lake where it swam off strongly.

With the lake now in complete darkness the days fishing ended and Mike moved on to the next venue on his Thailand fishing holiday. 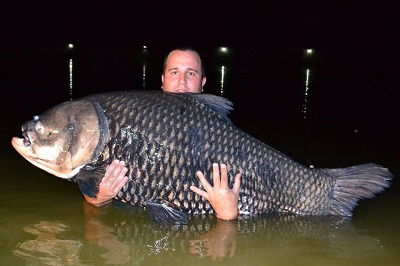