Stephen Heng a returning client from Singapore and a friend returned on a fishing trip to Bungsamran Lake in Bangkok.
Fishing from a private stilted bungalow the anglers fished sliding float setups with in-line feeders suspended two metres below the surface.
Super sharp Owner hooks mounted with bread crust hookbaits were attached to short mono hooklinks and then embedded into the feeder.
After casting out into the centre of the lake Stephen’s float did not reappear after casting and line began to rip from the spool.
After a relatively short but spirited fight a small Mekong Catfish of some 15kg’s was hoisted onto the unhooking mat.
Seconds later Stephen’s friend was into another fish which proceeded to charge off towards the centre of the lake.
Ten minutes later another Mekong Catfish was netted of a similar weight.
The day progressed with the Mekong Catfish continuing to fall to the anglers mid water tactics.
On several occasions both anglers battled fish side by side as the ravenous Mekong Catfish smashed into the critically suspended balls of bread.
Stephen and his friend caught fish throughout the day with several specimens topping the 30kg mark.
Regularly recasting the rods resulted in the anglers amassing a gigantic forty fish haul consisting of numerous Mekong Catfish to 30kg’s+ in addition to Striped Catfish to an estimated 11kg’s. 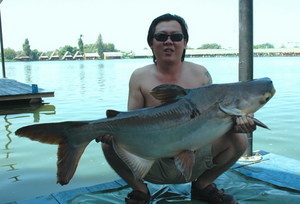